Since summer 2020, the Humboldt Forum has been organizing a virtual think tank together with five African cinema initiatives: the Cinema Spaces Network (CSN). In March 2022, the members will come together to present themselves, their work, initial projects and their visions to the Berlin audience. From 2–7 March, everything will revolve around the question of what cinema can, could and would like to be in 2022 and beyond – for example in Kinshasa, in Khartoum, in the South African Eastern Cape, in the Kenyan pop-up cinema at Lake Elementaita or in Burkina Faso’s cultural metropolis Bobo-Dioulasso.

The Humboldt Forum facilitates a platform to Cinema Spaces Network for a transcultural exchange of knowledge and culturual practices. Every evening at 19.00h, the members present films in Hall 2 with a special connection to the cinema work in their region. The opening film on March 2nd will be BAAMUM NAFI (NAFI’S FATHER) by Mamadou Dia – Senegal’s Oscar candidate in the competition for the Best International Film 2021. Each evening at 5.30pm the CSN members invite you to Cine Lectures. These interactive lectures will focus on different concepts of how cinemas can become new cultural and social centers – in urban as well as in rural areas. During the day, workshops and seminars will be held at the Humboldt Forum and throughout Berlin – meetings with professionals and interested parties from various film industries.

Ciné Guimbi once was one of the most popular cinemas in Burkina Faso. Dormant for more than two decades, it will soon re-open. With a brand new concept and architecture.

WE WERE ALL ROOTING FOR YOU!

In this innovative screening session, Njoki Ngumi of the THE NEST COLLECTIVE explores an alternative to the expected silent introspection of group film engagements, inspired by several live audiovisual commenters in Kenya who make films come further alive by repositioning them in time and place. In this gamified session, she guides an audience through a curated selection of film excerpts, inviting the sharing of their quiet thoughts about what they are watching, so as to build an intimate, shared experience together.

TSHOPER KABAMBI/Ciné Na Biso: LIGHT IN THE HEART OF DARKNESS

The famous title of Joseph Conrad’s Congo novel has been sticking to the country’s reputation like a curse. Today’s nascent Congolese cinema scene actively counteracts.

In rebuilding an audience, what is considered the ‘right’ film?

Find here some moments of our online discussions, recorded in the “think tank” phase of CSN in 2020 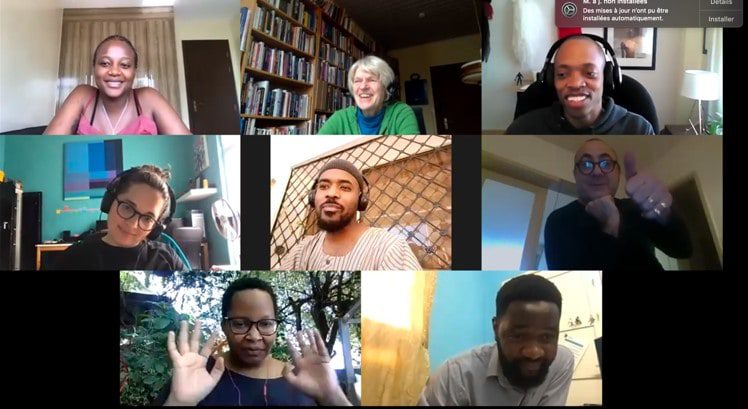 MOHAMED explained the necessity to have a VENUE FOR CINEMA, which operates independently from governmental bodies. That includes the space and electricity. Only with these conditions, cinema/film can be used in support of building a new democratic society in Sudan.

MOHAMED: The initiative gets support from individuals in government, but overall the situation is unstable, not predictable, especially in view of upcoming election.

SYDELLE mentions a platform – developed for sports. If that might be a model for CSN to look at – for inspiration?

SYDELLE expresses frustration about how difficult it is to get access to African films which SUNSHINE could screen: How can CSN support in getting better access?

NJOKI says, it is her main focus of interest to find out: How do you we change audience behaviors? How can we access new audiences? What curatorial strategies have worked. Her idea: Cinema spaces need to be multi-modular and address teenagers/families. FUN FILMS and SHORT FILMS seem to be good entry points.

JIM explains the concept of “live narration”, as practiced in Nairobi video dens: The “narrators” explain and translate films from foreign countries. An idea for a performance (in reverse), later on in summer 2021 at Humboldt Forum?

SYDELLE: European and other funders change their ‘focusses’ every year. Very difficult to adjust – esp. with regards to providing salaries for the team.

TSHOPER: In Kinshasa, people are coming to screenings, even if they don’t know which film is on. Demand is huge!

JIM: Nairobi does have cinemas. But tickets are expensive, very few non- American films – hence: the existing cinema spaces are for expats & tourists, but not for Africans who want to see African content.

TSHOPER: The cinema spaces we want to create need to be NICE, ELEGANT, ATTRACTIVE and AFFORDABLE. 50Cent/1US Dollar max as entry fee. Could work in cooperation with eg restaurants. He wants to train young people to run these places. There are plenty of applications. Currently, at Cine na Biso there are 35 staff. One needs to develop a tool, by which people are paid (e.g. by getting a 30% share of ticket sales); he says: difficult to find model for a monthly salary. A cinema he foresees in Kinshasa needs 3 people: projectionist, security, management/curation. Five screenings per day: 10/12/16/18/20h – with programs for different audiences (5-50 persons each)

All: It is key to find a model, which is “sustainable”. Different countries have different approaches: DRC says: an affordable/low price entry fee might work. South Africa: free entrance so far was the operation. Others?

TSHOPER: There’s a higher demand from e.g. schools than Cine na Biso can cope with.

All: Solar-powered equipment, that can be charged to be independent of electricity is key/wanted. Which models for sound/projectors are good? VECARO seems to be one option. Research/advise in this field: In high demand from CSN.

BERNI stresses differences between the various African countries: Nairobi at times seems like US in comparison to Burkina Faso!

BERNI is very interested in extending through CSN from “francophone” Africa to other African regions – in distribution, but also production with various initiatives running through CineGuimbi.

SYDELLE/TSHOPER on language/dubbing. Whereas Tshoper says: African films subtitled in French works for Cine na Biso screenings in Kinshasa – Sydelle says, in her region, films need to be dubbed in local languages due to high illiteracy in regions Sunshine is presenting films; Sunshine does “dubbing”

SYDELLE/NEST discuss who “owns” the spaces where cinema is currently taking place, in Kenya, South Africa? Is it a purely ‘middle class’ thing? How can we open up to others. What’s our approach? What’s our attitude towards Nollywood?

THE NEST: In Kenya, there’s a phenomenon which bugs us – ‘the elite corruption’ which distrubs the creative scene massively. To give an example: more and more people shift their entire production outside the country, e.g. to Malwai – as a result of corruption which makes filmmaking horribly expensive.

THE NEST: Crucial question: what do white people like about African art? And: how do we – African filmmakers – react to those ‘preferences’? 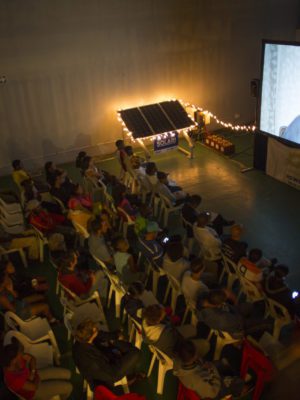 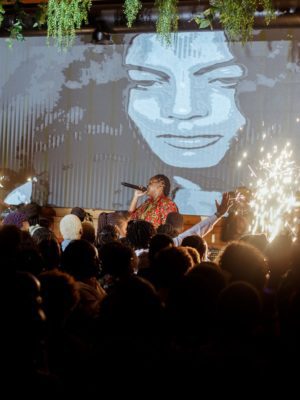 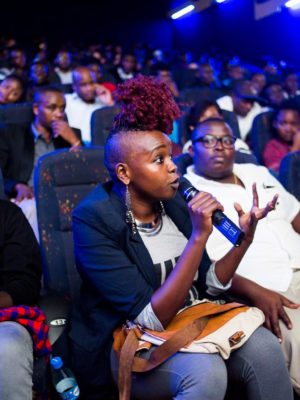